Today I spent the whole day in the Austrian mountains filming. The camera man and I went up in the gondola first thing in the morning in order to be able to still experience and film the mountains’ solitude and pristineness (before the groups of hikers turned up, looking a bit like ants on a pile of sugar…). The weather was perfect: fog and clouds were passing by the sun, so that every moment seemed like we were yet in another landscape, looking at another mountain, as if a painter kept putting on another layer of shade over the colours that were just there. Up on 2500m nature is just about waking up, the forces of spring and summer push themselves through the soil and each small batch of flowers seems like a miracle – if you consider that only two weeks ago this whole mountain was (still) covered in snow (again) – (hence the reason we had to break up our first filming days and come back now). In one scene I was supposed to sit quietly on an overhanging rock watching the views of the valleys while the camera man was panning the panorama. The silence that surrounded me was filled with a sense of deep-time stillness, the mountains, these silent witnesses of millions of years of activity, unmoved by the history that passed by their eyes, seemed profoundly alive and vibrant. ‘Be like a rock’ came to my mind. It was a sentence that I used to say often to myself in order to persevere, to not cave in when I felt the going was tough. But it seemed sometimes like one had to ‘harden’ oneself in order to bear certain emotional upheavals. As I was sitting on this oddly shaped rock today, I could sense the aliveness of it, the warmth of the material, the powerful support and the layers of rock formations and earth beneath it.  As I was faced by the enormity of the mountains in front of me, it occurred to me how to ‘Be like a rock’ can be such a dynamic posture. As a rock you can be weathered by the winds, heated up by the sun, frozen for months under heavy weights of snow, broken open by small plants and moss that want to find a home in your folds and become the shelter for small (and big) critters. And you can even be used by a sculptor’s hand to become something totally other you ever dreamed of. 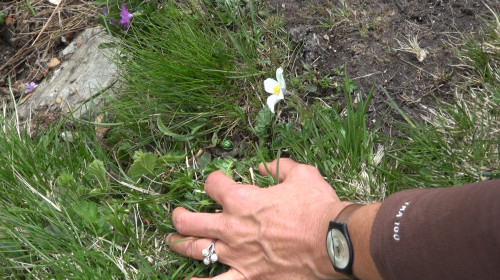 But above it all – as a rock you carry this sense of deep time…. A rootedness into the past and a fearlessness into the future. ‘Be like a rock’ can be as dynamic as the green shimmering bug that looked like a small miracle today when he came out from underneath his hiding place,  a dense bushel of wild grass. From afar I heard the camera’s man voice saying ‘now!’. It was the call for me to get up and leave the scene. I jumped up, as I felt I had woken from a deep dream (and we had to do the scene again). I wish you all some beautiful (and rocking) summer days.