Gerda Lerner at the UNESCO

I am writing this blog while I am still in Paris. Not far from my hotel, the Eiffel tower is showing its eternal majesty and only a few min walk from here the UNESCO building shows its global presence, reminding us all of the diversity of our global culture  – surrounded by buildings of the French ministries, and to the right of the hotel is the newly renovated impressive Rodin Museum. But I am not here as a tourist. I just showed the film ‘Why Women need to Climb Mountains’ at the UNESCO yesterday to an audience of over 100 people. Thanks to the Permanent Delegation of Austria to UNESCO, the Austrian Cultural Forum in France, the US Delegation to UNESCO, and to the Division for Gender Equality in UNESCO – and last but not least – thanks to my friend Barbara Torggler, who works in UNESCO, this event was able to take place. 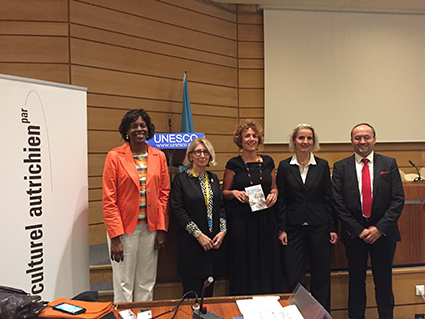 A special thank you goes also to the Austrian Ambassador to UNESCO, Mr Harald Stranzl, to Dr. Mario Vielgrader, Director of the Austrian Cultural Forum, to the US Ambassador to UNESCO, Ms. Crystal Nix-Hines, to Ms Gülser Corat, Director of the Division for Gender Equality in the Office of the Director General of UNESCO, and to Ms. Anna Walch, Attaché at the Austrian Delegation, who put in many hours of work and thoughts into making this event successful. While I spent the afternoon in preparation for the event at the UNESCO building I was able to get a sense of the atmosphere there. Only just taking the elevator to another floor is an experience. I felt I was spending a few minutes with the whole world. People from all over the world wait to be transported from one floor to the other and already in that short moment of time, all the cultural differences are being revealed. African men let the ladies go out of the elevator first, American ladies speak and laugh in loud voices about the slowness factor of the elevator, Chinese men watch quietly and I stand there, a full-fledged European with some other cultural influences in my blood, trying to guess who is from where and what their mission is here. 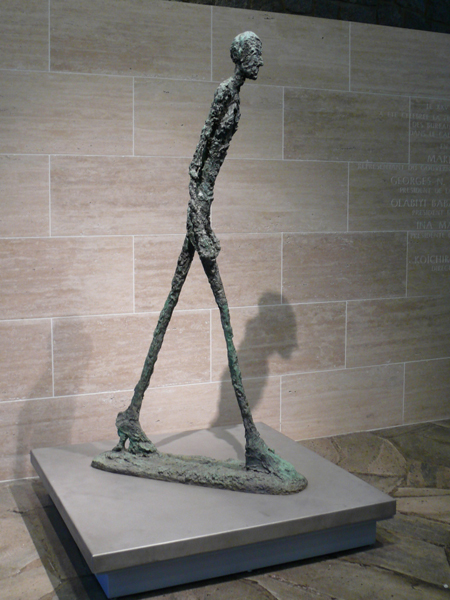 As I walked down the hallway toward the screening room, I passed by an exhibition about the different religions of the world and then a thin long Giacometti statue, a walking figure, leaning forward, a human being that shows urgency, and I was thinking how we are all ‘on the way’ and how we are all going from one place to another, not just outwardly, but inwardly and how in a sense the urgency in our lives and in general seems to have increased due to the wake up calls we face everywhere on the planet right now. 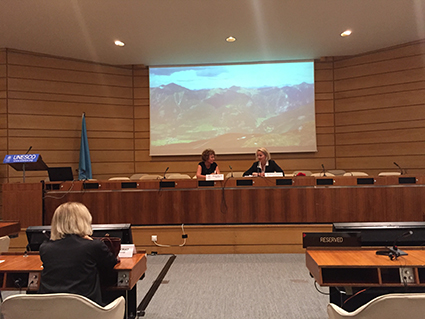 Q & A after the film with Renata Keller, Barbara Torggler

This became even clearer when we did the Question and Answer sessions after the screening. The film had evoked big questions and also a sense of urgency: how are we going to create a future, as men and women, where we are self-authorised human beings who are also able to stay in a creative exchange about new and innovative ideas and solutions to our planet. What does it mean to be an independent thinker and at the same time be able to stand in constant dialogue with other people who may not share the same opinion? How do we reach new, collaborative solutions? Why do we need to have a sense of our historical roots whilst being very open and vulnerable to other cultural influences? How are we going to reach young people, so they also learn about how someone like Gerda Lerner lived with inspirational, grass-root and hands-on spirit? At the Apero afterwards there was a lively discussion about gender issues and then mainly also about our political landscape in Europe. Questions on what are the causes for sudden or not so sudden changes in political views amongst European citizens. What is needed to have answers to the fears and disappointments that many people feel? I appreciated to spend time with well-informed Europeans who also give their time and life to be finding political and cultural solutions where organizations like UNESCO are not only holding a global presence and space but offer also very hands-on and project-led environments where we global issues can be researched, discussed and moved forward in a collaborative way. 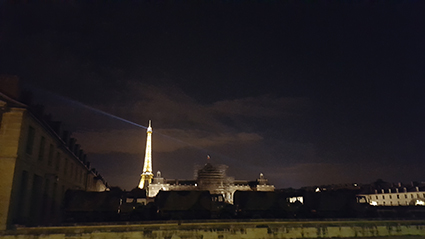 As I passed by the UNESCO building late last night, the Eiffel Tower was light in beautiful yellow light and the full moon was smiling behind a few clouds, I realized that this had been the REAL premiere for the film, and especially for Gerda Lerner. She would have loved to know that the film was shown at the UNESCO. As someone who, even when she had become frail in her old age, was a keen reader of the morning newspaper over every breakfast, Gerda was well informed about the issues of the world and was thinking about them with the keen mind with which she had done her historical and human research. She carried the UNESCO values (….’ to increase universal respect for justice, the rule of law, and human rights along with fundamental freedom‘…)  deep in her heart.  I felt that yesterday, Gerda’s legacy was truly honored, especially because the film was seen by so many people who also really care deeply about our future and want to stay in urgent and creative dialogue about all the issues that face us today. So, thank you again, very much to all the above contributors, to making the screening such a moving and powerful event. For more information: http://en.unesco.org/ https://www.bmeia.gv.at/europa-aussenpolitik/auslandskultur/kulturforen/kulturforum-paris/